Recession or not, it is time to reload

Whether or not the first semester of 2022 will be qualified as a recession, the market is currently looking to rise from its ashes.

With Q2 GDP being most probably the second consecutive quarter with negative real growth, we are in what is commonly characterized as a recession. Whether 1H22 will or will not be recorded as a recession in history books, the market is currently pricing it as such. It expects the Fed to slow its hiking process severely and to cut rates twice in 2023, an eventual positive catalyst for our portfolios.

While it is nearly impossible to time the bottom of the market, buying amid a recession historically offers the best return on investment.

On the day of the June FOMC meeting, the Fed Fund futures were trading at 3.5% for Dec-22 and 3.75% for Dec-23, i.e., the market projected one hike to occur during 2023. At the same time, the Fed's Summary of Economic Projection (SEP) implied the same rates: the Fed, as often, matched the market consensus.

But during the last couple of weeks, the bond market movements suggested a slowdown in the Fed's hiking pace and substantial rate cuts for next year. Indeed, the entire short-term forward curve moved down and flattened. The Fed Fund futures adjusted accordingly, with the Dec-22 now at 3.25% (vs. 3.50%) and the Dec-23 at 2.75% (vs. 3.75%). 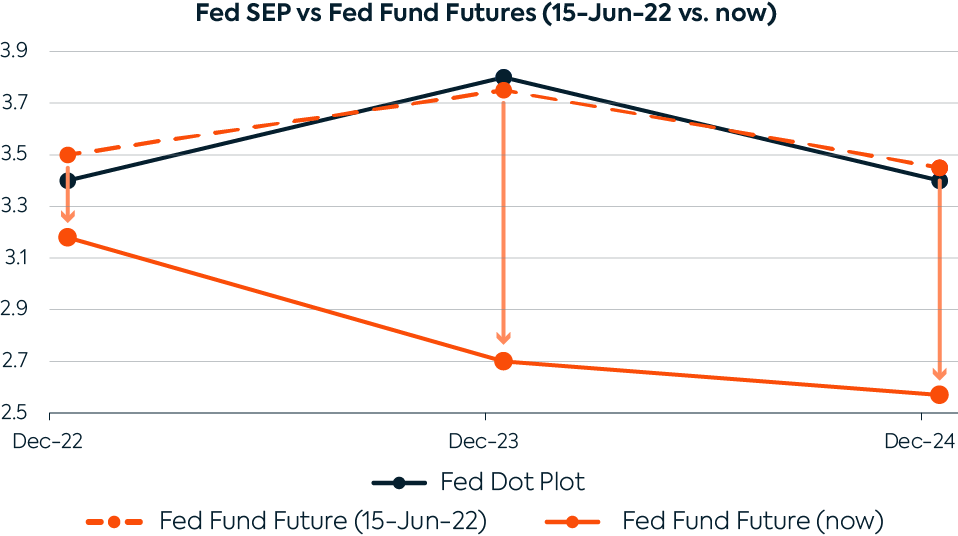 This year, the spread between Dec-23 and Dec-22 has been positive, hovering around +50bps. But, after a sharp move, it is now at -50bps, i.e., in about three weeks, it went from pricing two hikes between December 2022 and December 2023 to pricing two cuts.

Impact on our Investment Case

Recession: will it be official or not?

Our economic growth indicators suggested we started the growth slowdown more than a year ago and are now in a recession. For example, Copper, a commodity-based growth indicator, declined by more than 22% in a month. Even the “GDP nowcast” from the Fed of Atlanta, which historically slightly overestimates GDP, currently gives a Q2 GDP of -2.1%. Thus, with a second consecutive quarter of negative growth, the recession is de-facto here.

The market acknowledges it, but officials always take longer to determine a recession; sometimes more than a year after the facts, e.g., the Covid-19 recession (from February 2020 to April 2020) was officially declared only in July 2021.

The National Bureau of Economic Research (NBER) officially declares recessions. They do not consider the famous "two consecutive quarters of negative real growth" as the indicator. More precisely, the NBER's traditional definition of a recession is "a significant decline in economic activity that is spread across the economy and that lasts more than a few months. The committee's view is that while each of the three criteria—depth, diffusion, and duration—needs to be met individually to some degree, extreme conditions revealed by one criterion may partially offset weaker indications from another". Also, they emphasize that their analysis "is based on a range of monthly measures of aggregate real economic activity published by the federal statistical agencies. These include real Personal Income Less Transfers (PILT), Non-Farm Payroll employment (NFP), real Personal Consumption Expenditures (PCE), wholesale-retail sales adjusted for price changes, employment as measured by the household survey, and industrial production. There is no fixed rule about what measures contribute information to the process or how they are weighted in our decisions".

Thus, the NBER looks at the state of employment, income, production, and consumption to determine a recession. While we start to observe some froth on the job market, the latter is not yet at recession levels. This may lead NBER not to recognize the first semester of 2022 as a recession.

Recession: the key to a FED pivot?

Being or not in a recession influences policies, both fiscal and monetary. With the coming mid-term elections scheduled for November, we think the debate over the current downturn should be heated, and politicians will take time before recognizing the recession.

However, a recession may bring forward the long-awaited monetary policy shift, as a substantial slowdown in economic activities deteriorates the job market, the other Fed's mandate. The bonds market is thus already pricing such an outcome.

The official Fed mandate is to promote maximum employment and stable prices. As mentioned in our mid-year outlook, the Fed is currently only focused on bringing inflation down at the expense of a recession and potential job losses. Note that the first killer of inflation is, in fact, a recession. However, a negative NFP will raise questions regarding its current policies, especially as we believe inflation could drastically go down in the coming months, thanks to base effects and easing in various non-sticky components that massively contributed to the recent high inflation prints. Note that the Fed's preferred measure of inflation, core PCE, is already printing its 4th lower high at 4.7%, and so is in a downtrend.

Currently, the Fed does not acknowledge the recession using the argument of a strong labor market. Moreover, given the high inflation prints, it continues to load its bullets, i.e., rate hikes, officially to fight inflation and unofficially to have ammunition to fight what appears to be an inevitable recession.

Stock market bottoms usually happen in the midst of a recession, and the current drawdowns in the sectors we invest in are in line with historical standards. Moreover, our sectors are typically the ones that start a new cycle ahead of the general market bottom. An old and robust market saying is that "the time to buy is when there's blood in the streets." In other words, buying during a recession offers the best investment returns. While we do not have a crystal ball for timing the markets, there is little doubt that we are in a recession, irrespective of what officials may say.

The bond market signals the recession is here and, consequently, substantial Fed cuts next year. In other words, it brings forward the long-awaited Fed pivot, which should function as a support for the overall markets.

Historically, the bottom of the stock market happened during the recession, and sound investors should not wait for the recession to be over nor to be officially announced. Recessions are eventually very opportune times to buy, especially for long-term investors.

Back to all articles

This report has been produced by the organizational unit responsible for investment research (Research unit) of atonra Partners and sent to you by the company sales representatives.

As an internationally active company, atonra Partners SA may be subject to a number of provisions in drawing up and distributing its investment research documents. These regulations include the Directives on the Independence of Financial Research issued by the Swiss Bankers Association. Although atonra Partners SA believes that the information provided in this document is based on reliable sources, it cannot assume responsibility for the quality, correctness, timeliness or completeness of the information contained in this report.

The information contained in these publications is exclusively intended for a client base consisting of professionals or qualified investors. It is sent to you by way of information and cannot be divulged to a third party without the prior consent of atonra Partners. While all reasonable effort has been made to ensure that the information contained is not untrue or misleading at the time of publication, no representation is made as to its accuracy or completeness and it should not be relied upon as such.

Past performance is not indicative or a guarantee of future results. Investment losses may occur, and investors could lose some or all of their investment. Any indices cited herein are provided only as examples of general market performance and no index is directly comparable to the past or future performance of the Certificate.

It should not be assumed that the Certificate will invest in any specific securities that comprise any index, nor should it be understood to mean that there is a correlation between the Certificate’s returns and any index returns.

Any material provided to you is intended only for discussion purposes and is not intended as an offer or solicitation with respect to the purchase or sale of any security and should not be relied upon by you in evaluating the merits of investing inany securities.

Back to research
Search

An e-mail with instructions will be sent to you.

Type in your e-mail and reset instructions will be sent to you.