Charge or die – which battery is the best?

Carmakers are rushing to secure battery supply for their future electric vehicle (EV) models, but the real battle is between the different battery chemistries.

Given the booming demand for EVs, the global battery manufacturing capacity is planned to increase fivefold by 2025. Batteries are crucial components of electric vehicles: they determine a car's driving range and performance. They also account for 30-40% of the overall EV price. The race for battery development is heating up and leveraging different chemistries. Within the lithium-ion battery technology (the undisputed market leader), high-performance nickel-based battery chemistries (NMC/NCA) account for 75% of EV battery demand, the remaining being captured by nickel-free ones (LFP) that are cheaper but provide a lower driving range. In the context of high commodity prices and potential material scarcity, we believe that LFP chemistries will see a significant uptake in the near future.

Battery supply is at a critical stage

The LFP vs. NMC debate

And the winner is…

Battery supply is at a critical stage

Customers are hungry for EVs, and it won't stop

Despite the Covid-19 crisis and headwinds from higher raw material prices, the demand for electric vehicles (and batteries) keeps rising. In 2021, EV sales reached 6.6mn, and about 9% of global car sales were electric (a 4x increase in market share since 2019). The global fleet of electric cars on the road reached 16.5mn, triple 2018's fleet.

This trend is not reversing this year, with 2 million electric cars sold in Q1 2022, representing a +75% increase YoY.

Raw material availability is tightening up

While future demand for EVs looks bright, the availability and price of essential materials are questioned. In 2021 alone, the costs of lithium carbonate rose by as much as 150%, steel by 100%, aluminum by 70%, copper by 33%, nickel by 25%, and graphite by 15%, all directly impacting the cost of manufacturing EVs.

This unprecedented demand for batteries, combined with underinvestment in new capacity, is creating pressure on the supply of critical metals. While factories' utilization rate remains relatively low (at 43% for battery factories in 2021), additional investments are needed (especially in mining, where lead times are of several years) if future demand is to be met. The current surge in battery material prices is likely to drive interest in new mines exploration (drill counts have increased +50% for nickel and threefold for lithium from 2020 to 2021).

Today China produces roughly three-quarters of all lithium-ion batteries, accounting for 70% of cathodes' production capacity and 85% of anodes' production capacity (both critical components of batteries, see next section). Europe accounts for about 25% of global EV assembly but is home to only 16% of battery manufacturing capacity. The U.S. plays an even smaller role, accounting for only 10% of EV production and 7% of battery manufacturing capacity.

Global battery manufacturing capacity will rise five-fold by 2025, and all regions are expected to increase capacity. China will remain the leading country with about 69% of the world's production, but Europe and the U.S. will capture 17% and 10%, respectively.

The LFP vs. NMC debate

Basics of a lithium-ion battery

Lithium-ion (Li-ion) batteries have become the most used and preferred choice for EVs and consumer electronics. They consist of four main elements: a cathode (the positive electrode), an anode (the negative electrode), a separator (used to avoid contact between the two electrodes), and the electrolyte (carrying ions back and forth between the cathode and the anode via the separator).

The operating principle of a Li-ion battery is as follows: 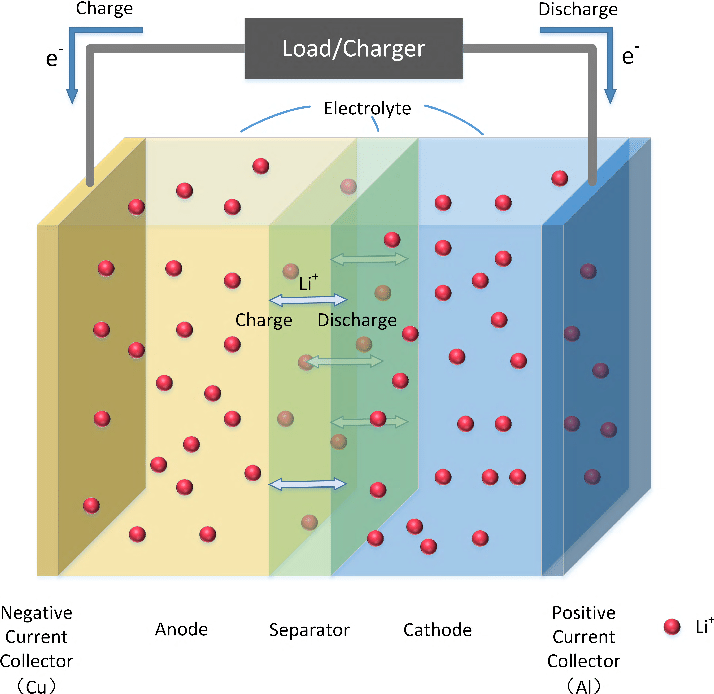 How to compare different batteries

Batteries are for electric vehicles, what engines are for gasoline vehicles. Hence automakers see it as the main differentiating factor. Batteries determine driving range, recharging time, and are key contributors to the price of an electric car. Numerous characteristics can be used to compare different battery technologies:

While all four elements of a battery (cathode, anode, electrolyte, separator) play a role in the performance of a battery, the cathode is arguably the most significant one and the main differentiating factor between battery types. The cathode is where the ions are released (or absorbed), and batteries' energy density and stability can vary based on their material combinations. Also, cathodes represent between 54% and 72% of batteries' material costs, making them the main cost driver. Li-ion batteries are generally named based on the chemistry of their cathode.

High commodity prices are accelerating the shift to LFP

Higher nickel content, such as in NMC and NCA batteries (NCA is exclusively used by Tesla), provides higher energy density but uses more expensive materials and requires a more complex manufacturing process. On the other hand, LFP batteries are cheaper and more stable (lower fire risk) but have a lower energy density (typically 65-75% of high-nickel NMC batteries).

The current context of high commodity prices is accelerating the shift to LFP batteries as they contain no nickel (note that battery-grade nickel is being mainly produced in Russia) and no cobalt. Also, recent technological progress (such as the cell-to-pack technology used in BYD's Blade batteries and CATL's third-generation LFP batteries) has increased LFP batteries' energy density to around 85% of conventional NMC batteries.

If current high commodity prices persist, the uptake of LFP batteries (driven mainly by the Chinese market) could accelerate and expand to Europe and the U.S.

And the winner is…

There is no one-size-fits-all technology for EV batteries. Nickel-rich chemistries remain well suited for high-level long-range models. At the same time, LFP appears to be a good option for entry-level short-range models and medium and heavy-duty vehicles (thanks to its lower price and superior cycle life).

In 2021, nickel-based chemistries represented 85% of the EV battery demand, the remaining 15% being captured by LFP (note that LFP's market share has already more than doubled from 7% in 2020).

China dominates, but others are waking up

China dominates most steps of the battery supply chain from raw material processing, cathode and anode production, and battery assembly. While the geographical distribution is unlikely to shift significantly in the near term, we still expect Europe and the U.S. to grab a bit of market share from China, driven by favorable policies and automakers' willingness to relocate battery manufacturing closer to car factories. For instance, Volkswagen recently announced a new partnership with Umicore to build cathode material in Europe. Northvolt expects to produce 100GWh/year of its cathode material, and Tesla plans to build a giant new facility to produce cathode materials next to its Texas Gigafactory.

On the LFP front, China benefited over the past decade from licensing fee exemptions thanks to an agreement with a research consortium owning a series of crucial LFP patents. These patents will expire this year, which could foster LFP production outside of China since the license fee won't be applicable anymore.

LFP to sustain the most significant growth

While the entire EV battery is expected to surge in the coming years, we believe that LFP chemistries will enjoy an even steeper growth, rising from 15% market share up to 40% in the near future. Major non-Chinese automakers have already started substituting NMC/NCA batteries for LFP ones. Tesla is already using CATL's LFP batteries in most of its standard range Model 3 and Model Y (in the first quarter of 2022, half of all Tesla EVs produced were using LFP batteries); Volkswagen plans to shift its entry models to LFP starting 2023. Ford confirmed it would begin using CATL's LFP batteries for many of its commercial EV models (Mustang Mach-E, F-150 Lightning, E-transit, etc.).

Diversifying batteries' chemistries is also a way for automakers to add new supply channels in an industry where we might see a supply deficit in the near future.

Today's leading manufacturers of LFP batteries are BYD and CATL, together capturing close to 70% of LFP's market share. Most battery manufacturers explore different cathode chemistries (CATL and BYD produce both LFP and NMC batteries) and formats (pouch, cylindrical, prismatic, blade). Leading battery makers also dedicate time and money to the development of new generation batteries, such as solid-state batteries (using solid electrolyte instead of liquid), which intend to improve stability (non-flammable) and use metal anodes (increasing energy density) while keeping costs lower. Many established battery makers (e.g., Samsung SDI) and new entrants (e.g., Quantumscape, Solid Power) are exploring the solid-state path. However, the technology still has to overcome several challenges (formation of dendrites, scalability, manufacturing costs, etc.) and is not expected to enter the market before 2030.

Back to all articles

This report has been produced by the organizational unit responsible for investment research (Research unit) of atonra Partners and sent to you by the company sales representatives.

As an internationally active company, atonra Partners SA may be subject to a number of provisions in drawing up and distributing its investment research documents. These regulations include the Directives on the Independence of Financial Research issued by the Swiss Bankers Association. Although atonra Partners SA believes that the information provided in this document is based on reliable sources, it cannot assume responsibility for the quality, correctness, timeliness or completeness of the information contained in this report.

The information contained in these publications is exclusively intended for a client base consisting of professionals or qualified investors. It is sent to you by way of information and cannot be divulged to a third party without the prior consent of atonra Partners. While all reasonable effort has been made to ensure that the information contained is not untrue or misleading at the time of publication, no representation is made as to its accuracy or completeness and it should not be relied upon as such.

Past performance is not indicative or a guarantee of future results. Investment losses may occur, and investors could lose some or all of their investment. Any indices cited herein are provided only as examples of general market performance and no index is directly comparable to the past or future performance of the Certificate.

It should not be assumed that the Certificate will invest in any specific securities that comprise any index, nor should it be understood to mean that there is a correlation between the Certificate’s returns and any index returns.

Any material provided to you is intended only for discussion purposes and is not intended as an offer or solicitation with respect to the purchase or sale of any security and should not be relied upon by you in evaluating the merits of investing inany securities.

Back to research
Search

An e-mail with instructions will be sent to you.

Type in your e-mail and reset instructions will be sent to you.